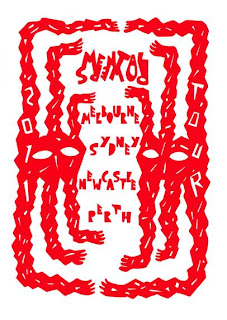 Perth 4-piece Mental Powers perform in Melbourne, Sydney and Newcastle in February in support of their new 12” LP, HOMOH. A four-track pressing with hand printed recycled covers, HOMOH marks the fourth release from this enigmatic group of performers.

The pure chaos and energy that Mental Powers infiltrates into every gig is unparalleled. Weaving together ambient drone, hypnotic rhythms, krauty influences and free-jazz composition, Mental Powers are certainly one of Australia’s most exciting acts. Performing since 2007, the remarkable synergy that binds the band together on stage is captured on vinyl in their new release.

Perth’s Mental Powers play a kind of trance music. The kind that feels like you’ve taken one too many muscle relaxants and somehow – accidentally – severed your carotid artery. – Tim Scott via Mess&Noise

Traversing the impenetrable terrain of rhythm and repetition, their first release should be taken as a whole and not the sum of its parts. Combining painstakingly handcrafted art direction and musical production - all credited to none other than ‘Mental Powers Group' - one is lured into their universe, the way they want you to see it. – John Kay via SixThousand

They create sound which inhabits only the very fringes of what might be called pop or rock music, and which in any case renders the use of such terms redundant. – Lyndon Blue via CoolPerthNights


So if you want myspace links, search for em. Here is some other stuff (couldn't find any Palmists links, they're good though)...
Holy Balm interview on Cyclic Defrost
Holy Balm 7" review on Mess and Noise
Posted by Black Wire Records at 12:32 PM