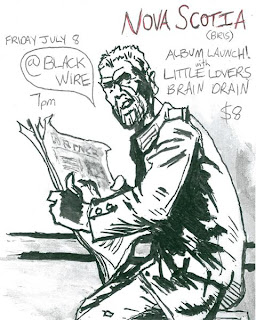 "Nova Scotia are a Brisbane five-piece whose glorious live shows and two sold out EPs have earned them a huge local following, festival slots and supports for the likes of Stephen Malkmus and the Jicks, Built to Spill and the Vivian Girls. Nova Scotia’s 90s revival sound references the slacker stylings and ragged melancholy of American greats like Pavement, Guided by Voices and Sonic Youth, but with a more euphoric and psychedelic exuberance. The band’s trademark three-guitar attack weaves around melodic basslines to create irrepressible songs that are both beautiful and fierce. Nova Scotia were born in 2006 from the heart of a Brisbane scene centered around radio station 4ZZZ, Rockinghorse Records, and essential bands like Turnpike and Seaplane. They released the “Bear Smashes Photocopier” EP in 2007. It quickly sold out, as did their follow up, 2008′s “Maritime Disasters”.

Much of Nova Scotia’s notoriety stems from their loud, joyous and unpredictable live sets. Centre stage is Scott Brique, the indie savant whose craft with hooks seems to defy reason. He is flanked by Ash Timms and Nathan Gygar (both also of Eat Laser Scumbag and Sweet Dreams). Dan Callaghan (bass) and Cam Scott (drums) make up the bounding rhythm section on which the band rides so happily. Nova Scotia’s heavily anticipated debut record will be launched on February 26. Mixed by Andrew White (restream, Mr. Maps), the ten-track self-titled album is beautifully presented in a stricty limited vinyl run, and also available digitally. The record features tracks “Don’t Forget Your Lunchbox”, “Second Sun” and “Round the Twist” as well as epic traditional set closer “The World is Not Enough”. It’s a superb collection of noisy guitar pop that should see Nova Scotia treasured by an even wider audience."