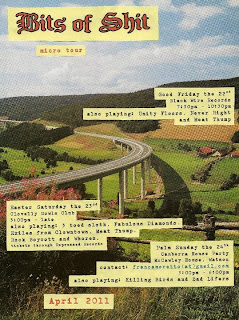 "Featuring former/current members of The Up Syndrome, Southernhay Orphans, The Sailors and The Ooga Boogas (and Brainwaves!), these four middle-aged punks hole up in their Coburg headquarters in Melbourne and spew out demented and rough takes on early US hardcore and punk that lends an ear to The Adolescents, Black Flag and The Stooges. It actually sounds a hell of a lot better than it reads on paper."- Lexicon Devil
Posted by Black Wire Records at 7:00 PM